Heads Up! Ostirch Tastes Like Beef, And It’s Less Filling 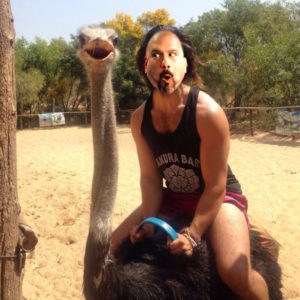 If you’re not aware of the hottest, healthiest food trend in the Delaware Valley, you’ve had your head in the sand, and that’s the last cheap ostrich joke you’ll read here.

Red meat. Looks like beef, tastes like beef. With fewer calories and less fat than beef, turkey or chicken. Less cholesterol than beef and chicken.

“This is the meat for the next millennium,” gushed Tony Luke Jr., the hyperbolic owner of Tony Luke’s, the popular sandwich shop at Front and Oregon.

“We’ve been serving it for about three months,” Luke said. “And it’s been incredible. We had no idea South Philadelphia would embrace an O-steak sandwich. I call it the guilt-free cheesesteak.”

Slather it with Cheez-Whiz and fried onions, and maybe it’s not that guilt-free. But they also serve an ostrich burger, and you’d have to eat 12 of those to equal the fat in one same-size hamburger.

“Ostrich has been considered an upper-class meat,” Luke said. “We’ve always been a working-class business. But now it’s affordable, and it’s great to see a construction worker with his hard hat on step up to the window and order the O-steak.